February Is the Time to Prune Muscadine Grapes

Find this article at:
go.ncsu.edu/readext?769533
— Written By Jessica Strickland

The common type of grapevine grown in Eastern North Carolina is muscadines. Muscadine grapes are native to the Southeastern United States and are easier to grow than other types of grapes because they have a high tolerance to pests and diseases.

A common question about grapevines is what time of year do we prune them. The best time to prune grapevines is during late winter, usually February, while the vine is dormant and before growth begins in the spring. There use to be concern about the vines “bleeding” if pruned too late during the dormant season but it has been found that the vines “bleeding” or dripping sap after pruning cuts does not have a negative impact on vines.

When it comes to how to prune grapevines, the answer is a longer explanation. Mature vines left unpruned can become a tangled mess of unproductive wood. Pruning is the key to maintaining healthy wood that will produce fruit. For those that do or have seen grapevines pruned properly realize that you are cutting a lot of growth off the vines. Cutting this much of the vine away can scare some people who are pruning vines for the first time. Grapevines produce a lot of new growth each year, so you need to cut away a large portion of last year’s growth to allow room for new growth next season.

Since you are leaving 2 to 3 buds of last year’s growth, each year that you prune your vine you will be making your cuts a little farther away from the vine’s main arms. You want shoots to be spaced out evenly across the arms, so you may completely take out some shoots that are too close to other shoots. You will also want to remove entire shoots that are dead, damaged, or smaller than the diameter of a pencil. These types of canes are weak and will have poor fruit production. 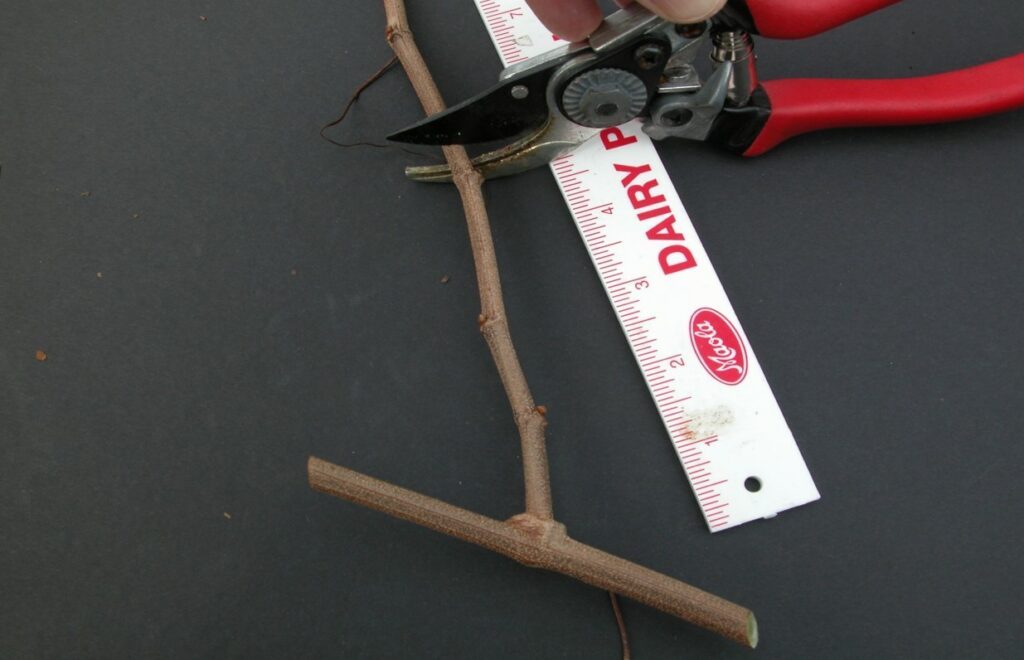 When pruning muscadine grapevines, shoots from last year’s growth should be cut back to 2 to 3 buds.

If you have recently planted vines that are 1 to 2 years old, then your pruning job is a little different than that of a mature vine. When pruning new vines, you are focused on training the vine to grow on the trellis instead of focusing on fruit production. For the first couple of seasons after planting, you should focus more on training the main trunk and arms of the vine on the trellis. You may have some fruit the first few years but training the vine first will be beneficial in fruit production in future years.

After planting, prune the stem back to 2 buds. As new growth begins, select the most vigorous shoot to be your main trunk and cut away the others. You can stake this shoot to encourage it to grow upright towards your trellis. When tying up the shoot, remember to avoid tying it too tightly to prevent girdling of the vine. During the first year, continue tying the shoot upright as it grows, while removing any side shoots. When the single shoot is several inches (6 to 8 inches) above the wire of your trellis, cut the top of the shoot off a few inches below the wire (6 inches). By cutting the shoot tip off, you are causing the vine to produce side shoots at that cut. As the side shoots grow, select the most vigorous ones and train them down the wire which will form your main “arms” or “cordons” on the wires. After the cordons have developed to full length, side shoots can be allowed to develop. Then you will treat it as a mature vine and let the side shoots grow and prune them back to 2 or 3 buds every year during the dormant season.

So take advantage of any good weather days in February to prune your grapevines. Proper annual grapevine pruning in February will allow for you to enjoy a great grape harvest later this year.